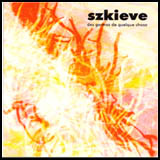 INFO:
Released in 2000 deleted a few months after. This disc is totally sold out although there are still a few copies here and there.

PRESS RELEASE:
It is neither ambient nor noise music. Its somewhere in the universe separating those two not necessary oxymoronic concepts. This eleven-track debut opus is going to deserve you a feeling of uncomfortable flimsy silence, very low frequencies and unheard artifacts. "Do you really think this was made on purpose?" is often saying Szkieves front head Dimitri della Faille. This album is disturbing the mind of the honest person by the use of very extreme frequencies and unusual compositions. Only original sources were sampled for this record. Szkieve used for this album his own technique called "Palimpseste" by the name of his first demo. It is actually referring to the fact that most tracks are made by two or even more layered tracks. This is the secret of his very rich and textured sound.

Szkieve (pronounced s-kee-vh) is Dimitri della Faille, founder of Disques Hushush. Born and raised Belgian and living in Montréal, Dimitri is currently working on his PhD thesis in Political Sociology. During his graduate studies he visited several universities in Argentina, Belgium, Canada and the United States. Szkieve is actually a mispelled equivalent for the word "Skew" in the Brussels dialect.